Let's get started with the first component: The Receiver.

Here is it still as a prototype 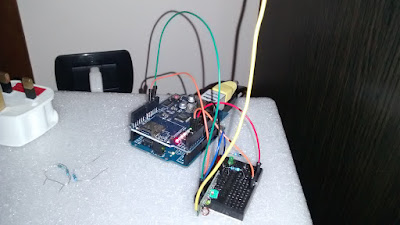 It's made up by an Arduino Uno Board, with the ethernet shield to get network access and the wireless RF433 receiver

The wireless receiver receives messages sent by sensors and then route them towards WEB/APP server, using http protocol. It acts as a simple router.

Communication protocols are very simple and currently not secure, so for now this system cannot be in a public network.

The message sent by sensors is a character string made up in the following way:

The receiver gets this string and send it to the WEB/APP server, using the following HTTP GET request:

where SERVERNAME is the domain in which WEB App is installed, PASSWORD is a secret key known also by the WEB/APP server and STRING is the sensor's data.

As already said, communication protocol is very simple and without ACK...for now it's just a prototype and it aims only to debug system 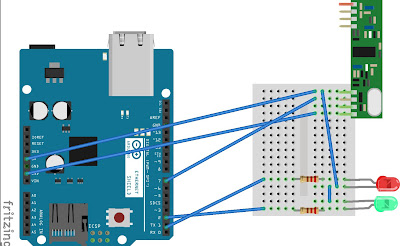 The Ethernet shield is linked to Arduino UNO; all the system is powered up by external 5V.

- ethernet shield setup using standard Ethernet library; it this case we use a static IP (but you can use DHCP if your network provides it);

- the main thread wait for a wireless message;

- after received a new message, RF status led lights up and the message is sent to WEB/APP server using HTTP request;

- during the http request, ETH status led lights up and it turns off after the HTTP response;

Here you can find source code for the receiver: DOWNLOAD

And here is a video about the receiver doing its job...